Donald Trump has declared in a White House briefing that his “authority is total” when it comes to lockdown rules during the coronavirus pandemic, and he denied that he was weighing firing Dr Anthony Fauci, the country’s foremost infectious diseases expert who sits on the coronavirus task force.

After a weekend reprieve from presidential briefings that have been likened to Trump rallies for their uninterrupted flow of Trumpian id, the president returned to the lectern on Monday to deliver one of his most bizarre performances yet. 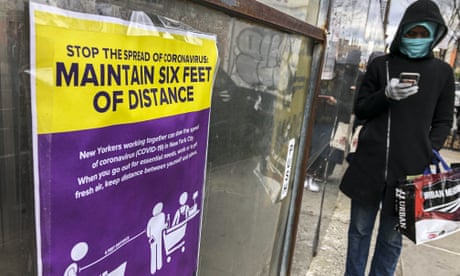 He played a campaign video produced by White House staff, in a possible violation of elections laws, that he said highlighted the media’s downplaying of the coronavirus crisis in the early stages of the pandemic.

He jousted with journalists who questioned a tweet he had sent earlier in the day, in which he claimed to have fiat power to override orders by state governors to close nonessential businesses and public spaces and encourage residents to shelter at home.

And Trump bristled at the suggestion that his power was restricted by the American federalist construct, which grants autonomy to the 50 states, and which he has repeatedly during the coronavirus crisis attempted to disrupt.

“When somebody is the president of the United States, the authority is total,” Trump said, referring to matters of public health and police powers inside the states. The assertion was dogpiled by legal analysts as a gross and wildmisreading of the constitution.

But Trump was not just challenged on the airwaves and on Twitter – he was challenged in the room, including by Paula Reid of CBS News, who asked him what his administration did in the month of February, when the health department declared an emergency, to fight the virus.

In response he attacked the media’s “approval rating”.

Then Trump was confronted by CNN White House correspondent Kaitlan Collins, who asked him about his “authority is total” line.

Coronavirus: the week explained – sign up for our email newsletter

“That is not true,” Collins said.

Trump spluttered in reply: “You know what we’re going to do? We’re going to write up papers on this. It’s not going to be necessary. Because the governors need us one way or the other. Because ultimately it comes with the federal government. That being said we’re getting along very well with the governors, and I feel very certain that there won’t be a problem.”

Has any governor agreed that you have the authority? Collins asked.

“I haven’t asked anybody. You know why? Because I don’t have to,” Trump said.

Who told you that the president has a total authority? Collins asked.

The briefing briefly featured Fauci, who was attacked in a message retweeted by Trump on Sunday, fueling speculation that the president was preparing to push out the preeminent epidemiologist.

“I was immediately called upon that,” Trump said, “and I said, ‘No, I like him. I think he’s terrific.”

Asked whether there had been clashes between the pair, Trump said, “We have been from the beginning. I don’t mind controversy, I think controversy is a good thing, not a bad thing.”

But when he stepped to the lectern, Fauci stopped short of delivering the White House line that the country, and the economy, were on the verge of being reopened at full throttle.

“Some people may think it’s going to be like a light switch,” Fauci said. “It’s just not going to be that way.”

… we’re asking readers like you to make a contribution in support of our open, independent journalism. In these frightening and uncertain times, the expertise, scientific knowledge and careful judgment in our reporting has never been so vital. No matter how unpredictable the future feels, we will remain with you, delivering high quality news so we can all make critical decisions about our lives, health and security. Together we can find a way through this.

We believe every one of us deserves equal access to accurate news and calm explanation. So, unlike many others, we made a different choice: to keep Guardian journalism open for all, regardless of where they live or what they can afford to pay. This would not be possible without the generosity of readers, who now support our work from 180 countries around the world.

We have upheld our editorial independence in the face of the disintegration of traditional media – with social platforms giving rise to misinformation, the seemingly unstoppable rise of big tech and independent voices being squashed by commercial ownership. The Guardian’s independence means we can set our own agenda and voice our own opinions. Our journalism is free from commercial and political bias – never influenced by billionaire owners or shareholders. This makes us different. It means we can challenge the powerful without fear and give a voice to those less heard.

Your financial support has meant we can keep investigating, disentangling and interrogating. It has protected our independence, which has never been so critical. We are so grateful.

We need your support so we can keep delivering quality journalism that’s open and independent. And that is here for the long term. Every reader contribution, however big or small, is so valuable. Support the Guardian from as little as €1 – and it only takes a minute. Thank you.